Posted by Eccentric Owl at 3:08 PM No comments:

I have seen the flame burning white
in a place cool and green,
deep, deep inside, at the core,
the very centre of my being.

I have felt the power of inner calm,
and seen the desire of a child
melt in the flame to reveal
a man, and infinity

When I die, when my soul's set free
all that will remain of me
is the love I've given, the heart's I've known -
When my body's dead, my spirit flown.

The good of a man, the smile of his face
are the things his death cannot erase.
Capacity for loving, acts of giving
are what make a life worth living.
Seek reward in love returned -
the smile in the eyes of those who have learned
that you love them;
it is through them that you will live on.
C. Lowe - 1988
Posted by Eccentric Owl at 6:38 AM No comments:

Some try to deny it
But I think everybody likes it
It’s the best fun lying down or standing up
They’ve not found a way to tax it
‘Cept for the sales tax on a mattress
There’s nothing like a good old fashioned .... !

Note: For those of you with a sense of rhyme and meter I know the Peach Melbas could have been smeared elsewhere. I thought about it but decided it was a little crass - not to mention sticky.
Posted by Eccentric Owl at 6:09 AM No comments:


Clink, clunk, clonk of bamboo chimes;
memories of summers fill my mind:
Curtains flutter a warm breath of air, stirs the pandanus,
ruffles her hair;
Diamond sunlight
scattered on the sea,
the scent of pollen fills the trees;
A blanket of stars thrown at the sky,
half a million fire flies.
A sense of stillness, a sleepy mind,
a sense of being, no sense of time.
A greater awareness of the things
otherwise not noticed
clunk, clonk, clink.
Hervey Bay, 1983
Posted by Eccentric Owl at 5:12 AM No comments:

Bud to petal, stem to leaf,
ever quietly as a thief.
Taste this nectar, test those wings
whilst all around nature sings.
The cruelest fate, a Cell of Glass;
sight unobscured by stone or bars
and life's rich pageant just outside
stirs your heart and passes by...
Cage a creature born to fly,
watch its beauty fade, its spirit die.
An empty soul, a dried out husk;
in the scent of freedom place your trust.
So much is beauty, so much is light;
with a touch of pain falls the veil of night.
Sunlight touches dewy fields;
passion flairs, sorrow yields.
Rising mist obscuring sight,
rise above in lilting flight.
Strong Earth below, warm wind above -
each is vital, each is love.
1988
Posted by Eccentric Owl at 6:30 PM No comments:

Empty vessels fill the rooms of my life;
blurred images printed from imperfect negatives.
And on you I pinned so many hopes;
you carried so much space
with which to fill empty vessels.
Empty vessels keep me company at night;
surrealist prints framed behind cracked, dusty glass.
And on me you pinned so many images;
seeing so much that was illusory.
Don't you know I'm just another empty vessel?
Empty vessels clutter my stairs and hall;
one way alleys never lead anywhere.
And on us they pinned so many dreams,
demanding that we fit their scheme,
and remain forever empty vessels.
1988
Posted by Eccentric Owl at 3:23 AM No comments:

I deliberated a long time about putting this one up.  It's personal, revealing and I was right on the rev limiter when I wrote it.

I'd watched the David Bowie/Catherine Deneuvre stylish vampire pic of the same name and that's the title's Genesis.  I've always been a Stevie Nicks fan and what started out as a poem about her and her lyrics found itself intertwined with a steamy relationship I was having at the time.  Hmm, unusual that.

I'm still not sure what it's about and the meaning seems to have shifted over the years.  What I thought then seems to be revealing itself as something completely different.  The way I call it now it's about the hunger for youth and passion, how if uncontrolled it devours your future.  The "subtle thread between what is known and what is said" relates to hiding our motivations (particularly in relationship) behind pretty, calculated words.

I'm not entirely convinced this is a good idea but I really like this poem and it's been buried in a box for years.


THE HUNGER﻿
She calls me back to the gypsy life
yet I know she's as much in chains as I;
Chains of gold, chains of lace, just an image, just a face.
And still I see her through my heart;
the futile moves as she plays her part,
the loneliness of her road
are things I feel, are things I know
Could she hear her heart, confront her fear
the chains would break ... disappear.
My head is full of the taste of you
rolled round my mouth like a fleshy fruit;
my constant thirst cannot be quenched,
this gnawing hunger never spent.
Your body scent, her sultry eyes,
the lotus flower, the butterfly.
Fleeting thoughts, sensual dreams,
fill her voice ... a primal scream.
Reality a subtle thread between what is known and what is said.
Make a pillow of my chest
lay in my arms and take your rest, close your eyes,
breathing slow, dreaming in the afterglow ...
Know the thirst that's never quenched,
though the fire is doused, the bedsheets drenched;
the hunger, never satisfied
'til hearts are stilled, and life has died.
She calls me back to the gypsy life
yet she's no more free than you or I;
bound in leather behind bars of sand
manacled at foot and hand.
But she hypnotizes with her song
I've listened to so hard and long;
building dreams for you and I
to make our own, to bring to life.
Dressed in clothes of mist and thread
she's caught inside her hunger's web.
Reality a subtle thread between what is known and what is said.
Posted by Eccentric Owl at 2:58 AM No comments:

In moments of stillness
I dream of the road -
Mountain curves, dry creek beds,
campfire stories often told.
A sleeping bag, a one-man tent,
the endless turning of two wheels;
scrape the pegs, throttle down,
know how freedom feels.

Leather jacket gypsies,
too loud in roadside bars.
Meditation with a mug of port
beneath a night of sapphire stars.
The pungent smell of chain oil;
the throb of a "V" twin
swallowing the whiteline
as the dawn air cuts your skin.

Life is a black ribbon;
the horizon marks the tide,
no end, no beginning
upon which Glory rides.
The hermit and the footloose,
the bonded and the free
cruise the endless highway
for a taste of liberty.

The Earth revolves beneath us;
dream and reality collide.
The road is life.  Life is the road.
Transending space and time.
The Sun reclaims the darkness;
the sea blends with the sky;
the exhaust pumps out an anthem;
the human spirit flies. 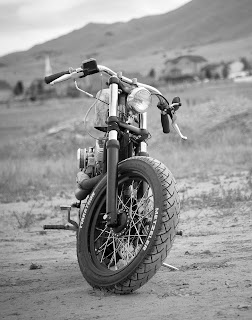 Posted by Eccentric Owl at 4:29 AM No comments: