They tell me it was 1957 but that's not how I remember it.  I remember being younger than that, standing in the backyard of our house in Kangaroo Road, Oakleigh and following my father's finger as it traced a small moving dot across a black sky against a backdrop of a gozillion stationary dots.
"What is it dad?"
"It's Sputnik."
"What's Sputnik?" I wondered
"It's a big metal ball."
"How did it get up there?'
"The Russians sent it up on a rocket."
In my minds eye I saw the kind of rocket you saw in an illustration from a Jules Verne book of that era hurtling into space, and someone opening a window and throwing out a big silver ball, (which could have been pretty much the way my non-technical father saw it too).
"Why?" I ask
"To frighten us", said Dad.
I looked skyward again, "Why are you frightened Dad?'


Laika was a heroine and the next thing I remember about the space program.  The first living, animate being to be shot into space.  A mutt from the some Moscow slum she was packed up with food, water and a life support system, which unfortunately for Laika was not designed to, and did not see out the whole of the mission.  Just as well really because her craft was not designed for successful re-entry and a few days after her untimely demise, it incinerated itself and Laika's remains in the upper atmosphere.  So alls well really; I would have hated valiant Laika's last thoughts to be, "Must have been the curry" as her poor little arse began to burn. 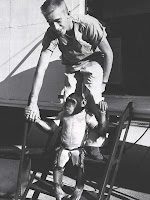 ﻿The cheapest astronaut to survive re-entry would undoubtedly be HAM the Chimp.  The indestructible Ham having flown further and faster than he was ever meant to overshot his landing area and had to wait hours in a capsized, yawing spacecraft for a chopper to lift him out of the cruel sea.  He is said to have suffered "no ill effects" (yeah right) and to have performed all his assignments perfectly.  He happily accepted the reward of an apple and half an orange from a grateful American nation.  They say if you pay peanuts you get monkeys which in HAM's case was all they wanted I guess.  HAM survived until 1983 having bored the other residents of the old chimps home to death over many years displaying his medal and regaling them with  tales of his heroic exploits like all astronauts.
Almost before we knew it there were manned Mercury, Soyuz and Apollo missions taking off with almost monotonous regularity, and Chip, Chuck and Buzz achieved a highest ever rating on the favorite baby names index.  One day in orbit doubled to two which doubled to four, then something circled the Moon and came back again.
The day Neil Armstrong placed his size 13's on the lunar surface I was at Connells Tavern in Melbourne with my workmates watching history being made on a 12" black and white screen suspended in the smoke haze.  I was 16 at the time and under age.  I'd scoffed a meal of double steak, double chips and double coleslaw and someone had bought me a couple of pots of beer.  The place was packed and I found myself at the back of the crowd climbing onto a garbage bin to get a better look.  All Connell's patrons heard of Neil's famous utterance that day was, "One small ...", before garbage bin, several empty gas bottles, a pot of beer and a 16 year old crashed to the floor.  Noise attracting attention like it does, everybody also missed Mr Armstrong's boot making the first imprint by human footwear on an extra terrestrial body.

Abandoning the Luna program, probably because it seemed rather pointless sending an endless procession of people to have a walk around on the Moon and bring back some pet rocks at great risk and exorbitant cost, NASA turned it's attention to the international space station and the Shuttle program.  Communication satellites, GPS, Star Wars defence shield, the Hubble telescope were all soon in close Earth orbit along with a massive assortment of other junk that made it look to passing ET's like the inhabitants of Earth were having a garage sale.  Deciding to investigate further, they have over the past decades inserted anal probes into every farmer between Chicago and Las Vegas and have come to the inevitable conclusion that the assholes are all the same.

In 1998, Bruce Willis valiantly and courageously sacrificed his life in a Christ like display of taking one for the team, when he blew himself to smithereens with a thermo nuclear device so as humanity would avoid a collision with a near Earth asteroid and Ben Affleck could marry Steve Tyler's daughter.

Now the shuttle program has ended with no imminent replacement and the only country left with a viable space program is Russia.  So it is Russia who will supply the space station and maintain  the satellites.  It's Russia who will polish the lens of Hubble telescope and dust of the US strategic defense lasers.

Wait a minute ...., weren't they put their to protect us from, from the frikkin' RUSSIANS!!?

Would a Russian sacrifice him or herself to blow up a near Earth asteroid?  Would a Russian care if the Strategic Defence System fell out of the sky?  Do Russians even know who Steve Tyler is and would they care who his daughter married? (They've got plenty of brides to get rid of themselves - check out the internet).  They've got the yanks to set it all up and now they have control!!  AAAAAAAAGH!  It's all been a hideous plot hatched behind the Iron Curtain.  The dogs, the yanks and the chimps all duped!

Dad you were right to be frightened.
Posted by Eccentric Owl at 4:30 AM